Testosterone Levels in Men by Age

It is a fact that testosterone levels in men fall as they age, often at the point in life when a man most needs to maintain a steady supply of this vital hormone. This decline typically occurs at some time after a male turns thirty, with a continued decrease of about 1 to 2 percent each year that follows.

Although such a slight reduction in the secretion of testosterone probably does not seem like much at this point, after ten years of a 2% drop every twelve months, a man could find that his production of testosterone is down 20 percent. Now that can make a tremendous adverse impact on his overall well-being quality of life. 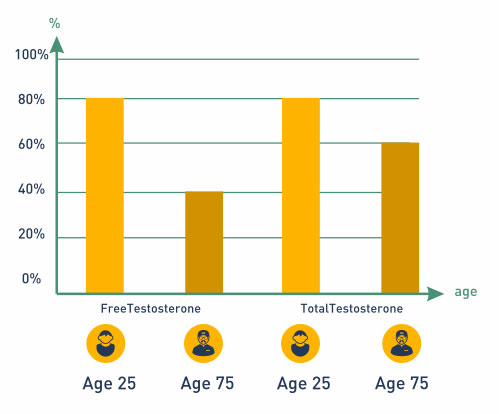 What Are Normal Testosterone Levels in Men

There is some general disagreement in the medical community as to what constitutes “normal” testosterone levels for men. Although there is no clear definitive answer on a specific number, and the ranges used by various labs can vary significantly, it is widely accepted that total testosterone readings from blood tests that fall between 300 ng/dL and 1050 ng/dL (nanograms per deciliter) are to be considered normal.

That does not mean that a person with a test result of 300 ng/dL is not dealing with Low T. There are many other factors to take into consideration when a doctor is making this determination. That is why it is imperative to seek out treatment from a hormone replacement specialist who will do more than just look at a number, but will, instead, assess the entire individual.

Maintaining optimal testosterone levels in men is crucial for the body to carry out the many functions that this essential hormone is used for. Energy, sexual ability, muscle tone, bone density, cognitive functions, metabolism, hair growth, and mood are all dependent upon a proper amount of testosterone circulating in the body.

The biggest concern that doctors specializing in hormone replacement often have is that men who are considered to be on the lower end of what is held as “normal” are actually dealing with the possible debilitating effects of Low T but are not properly diagnosed and prescribed medication to correct this testosterone deficiency.

This is where a specialist will do more than look at a number in a testosterone blood test result, although that is a crucial part of the diagnosis and determination of medication dosage to prescribe. Information gleaned from a physical examination, as well as current symptomology along with the severity of the issues that are present will all go into the equation when a diagnosis and treatment plan are devised.

What are normal testosterone levels in men at the various stages of one’s life?

The information below will help to break it down further:

It is clear that the variance shown can make a big impact on how a man feels, thinks, and looks based on where his numbers will be found. The average testosterone levels in men by age listed here are basic guidelines that hormone specialists will use to assess each male on an individualized basis.

Some studies have shown that men over sixty are often found to have total testosterone levels under 241, which could explain the many changes they are experiencing.

There is a tremendous benefit for men who are experiencing symptoms of fatigue, muscle loss, joint pains, stiffness, hair loss, low libido, erectile dysfunction, mental fog, depression, or memory loss to contact National HRT® to discuss the possibility of getting a blood test for Low T. These are all possible signs that testosterone levels are below what is needed by the body for optimum functioning.

Take a look at the normal testosterone levels in men by age chart below as a reference:

What is considered normal testosterone levels in men by age varies considerably, as shown above. A man in his early fifties who falls at the low end of the average range will most likely be experiencing many of the symptoms associated with Low T. Treatment with bioidentical testosterone therapy will be beneficial at this point.

The professional staff at National HRT® is here to answer any questions dealing with Low T or any other type of hormonal deficiency. We offer testing, support, and treatment for men, as well as women, dealing with decreasing hormone levels.